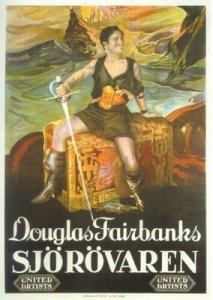 While watching recent Academy Award winnerThe Artist in the theater not long ago, we couldn’t help but notice that it lifted footage from a classic silent era film (The Mark of Zorro) starring one our favorite action heroes, Douglas Fairbanks.

Selecting just one Fairbanks feature to recommend as a starter is a difficult exercise; The Mark of Zorro, Robin Hood, and The Thief of Baghdad are all classics, but there’s something about The Black Pirate that puts it ahead of the rest.

The first great pirate movie and one of the best early uses of Technicolor, The Black Pirate starred Fairbanks in a role that is equal parts The Count of Monte Cristo and Fistful of Dollars, one that flaunted his skills as a silent-era action hero as no other.

Fairbanks is the titular buccaneer, in reality a young nobleman and sole survivor of a pirate attack who infiltrates the sea-faring criminals by posing as a master pirate and exacting an elaborate vengeance.

The then-43-year-old Fairbanks is at his acrobatic best here, defeating a pirate captain in a fierce duel, fighting six men at once while using a dead man as a shield in an even fiercer duel, capturing a ship single-handedly in a scene that has him swinging from mast to mast like a high seas Tarzan and, in the film’s most stylish stunt, jamming a knife into the ship’s sails and slashing them from top to bottom as he rides it down.

He’s only occasionally outdone by the movie’s beautiful muted color tones, partly a byproduct of the limitations of two-strip Technicolor process (used for the first time here) but also to satisfy Fairbanks’ wish to make The Black Pirate resemble an N. C. Wyeth painting. All of that, combined with the visual flair of director Albert Parker, adds up to vintage action-adventure like no other.